Today we’re announcing a chipset update to ODAC. Revision B improves general reliability, while meeting or exceeding the original performance criteria set forth by NwAvGuy. 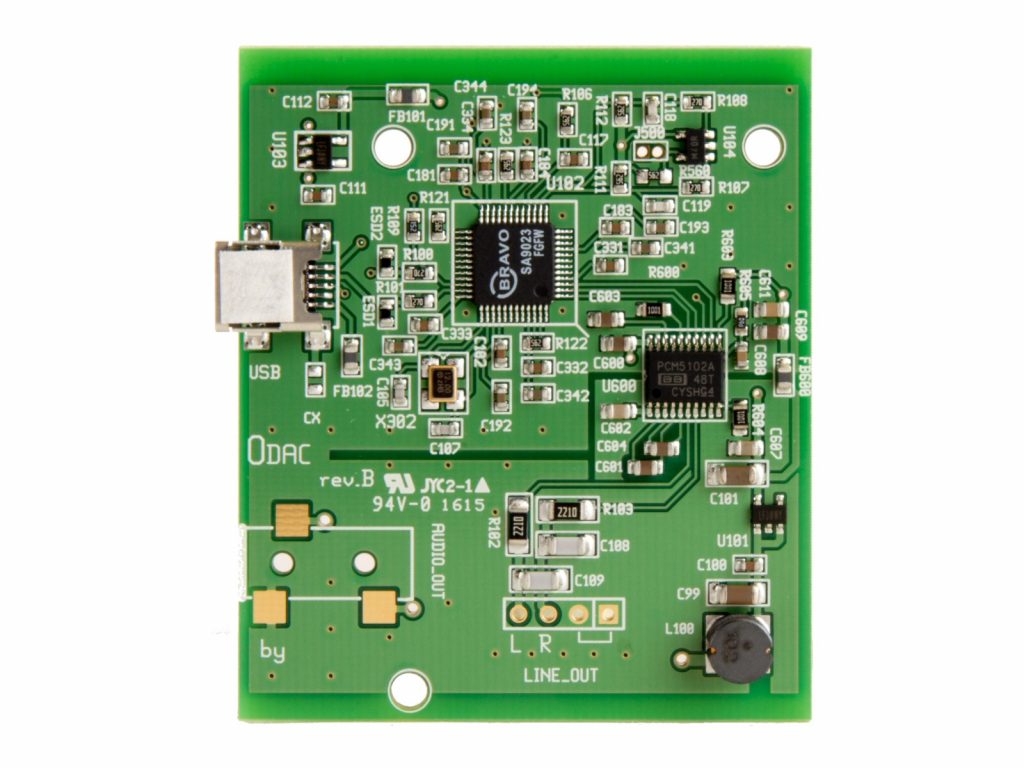 This announcement will come as a surprise to many, considering ODAC was declared as the be-all and end-all of DAC transparency by a now absent engineer. This article explains who owns the ODAC design, why an update is prudent, and how ODAC Revision B’s objectivity has been exhaustively verified.

Scroll towards the end for benchmarks, or read on for the full story.

ODAC was released on May 9, 2012, shortly before NwAvGuy vanished from the community. While his name is closely tied to ODAC, it’s critical to understand that ODAC was jointly developed by NwAvGuy and Yoyodyne Consulting.

Yoyodyne generated ODAC’s schematic and PCB, and NwAvGuy provided prototyping feedback and performance analysis. Yoyodyne also generated the project title, “ODAC” in 2011 and has remained responsible for all production engineering and distribution of the project to end retailers like JDS Labs and our counterparts.

In other words, ODAC was benchmarked and certified Objective by NwAvGuy; Yoyodyne generated the design and controls its manufacturing to this day.

NwAvGuy’s name has been intentionally omitted from ODAC RevB, so as not to imply an ongoing collaboration.

Our job is to deliver perfect audio performance to every user. We’ve hit this goal for 99.5% of ODAC users out of the box, and have found a way push ODAC’s reliability and objectivity to an even higher standard.

To better convey ODAC’s position,  Yoyodyne has shared worldwide distribution data. ODAC’s popularity continues to grow. Over twice as many ODACs shipped in 2014 compared to 2012, with a total of 12,000 units in circulation:

Increasing demand over time is amazingly rare for electronic production, and is a testament to ODAC’s positive reception.

Although ODAC has proven itself in the audio community, JDS Labs and fellow retailers have observed lower than expected yield (<1% DOA units), higher than expected long-term failure rates (< 2%), and an ongoing USB hub issue that NwAvGuy did not have an opportunity to address before his 2012 departure.

One of the first bits of ODAC feedback we received in 2012 revealed odd behavior: severe distortion, completely resolved by a USB hub. This peculiarity would ultimately affect less than 0.5% of all users, and the simple USB hub solution became well known within the audio community (later published to ODAC’s operating instructions). We invested in a dScope Series III audio analyzer in 2012 and verified ODAC’s performance.

The behavior was later identified as a power supply regulation design choice made by NwAvGuy. ODAC performs consistently with all devices, unless the host USB bus has remarkably low ESR ceramic capacitors placed too closely to the USB 5V output pin (rare). When ODAC is connected to such a host computer, ODAC’s 3.6V linear regulator performance plummets from 100% stable operation to extreme oscillation, which turns the perfect audio signal into garbage (lots of very audible distortion). There is no in-between. The regulator is either 100% stable, or 0% stable. Consequently, we’ve offered support for this rare behavior since 2012.

So, ODAC performs as described for about 99.5% of users. As demand grows, that USB bug becomes increasingly pronounced. Add in 1-2% DOA and long-term ES9023 failures, and ODAC retailers have growing collections of bad ICs. DOA boards are easy to catch via quality control, but long-term failures require frustrating warranty service.

Meanwhile, JDS Labs and Yoyodyne have engineered solutions to each reliability concern, meaning we can make ODAC reliable and objective for virtually 100% of users.

Yoyodyne produced a series of ODAC RevB variants in 2014 with reliability fixes. JDS Labs benchmarked each prototype to ensure equal or better performance compared to the original ODAC. Although the update was ready in late 2014, ODAC production runs occur about once annually. This long production cycle  is best for the project, as it minimizes supply constraints and keeps distribution flowing smoothly to several O2/ODAC manufacturers.

I think the community hoped NwAvGuy would return and publish necessary updates to O2/ODAC/ODA himself. At this point, a reliability update is the best judgment we can make for ODAC’s long-term success. Keep in mind that O2 is protected from derivatives by its license; ODAC is coordinated by Yoyodyne and nondisclosure agreements with its IC suppliers. Even so,  we do not want to modify ODAC. Subjective bias is not trivial in the audio business.

All of that being said, we’re confident ODAC RevB is a perfect reliability update. The newer DAC IC has proven reliable in other projects. In addition to thorough benchmarks, we’ve shipped  ODAC RevB to a few users seeking support for their original ODACs. Feedback is perfect. We also shared ODAC RevB at the 2015 AXPONA tradeshow and allowed some random visitors to perform A/B tests. No one could differentiate.

ODAC RevB utilizes the same PCB footprint and is a physical drop-in replacement to all existing ODAC and O2+ODAC assemblies. Revision B’s stronger output voltage of 2.10VRMS must also be accompanied by a slight DAC volume or gain adjustment when used in O2+ODAC; optimal gain is now 1.0/3.33x.

Analog filters and power supply passive components remain identical to the original board. The new chipset consists of an SA9023+PCM5102A, and the LDO has been updated to a ceramic stable Analog Devices ADP151 equivalent part. Fixes include:

ObjectiveDAC was designed for measurable and audible perfection. Reduced performance from ODAC RevB would be absolutely unacceptable, so we took great care in checking our work.

Engineering test methods impact test results. While THD+N, frequency response, and crosstalk are straightforward, even these basic tests are impacted by audio analyzer setup parameters and real world hardware setup. Certain ferrites on the mini-USB cable improve dynamic range by up to 10dB versus an ordinary USB cable. More complex tests like Jitter and IMD produce surprisingly different results based on signal strength, averaging, etc.. As Yoyodyne and I analyzed performance of the original ODAC through a TDK ZCAT2035-0930 ferrite equipped USB cable via dScope audio analyzers, it was clear that NwAvGuy had utilized averaging and custom dScope routines. We would never be able to definitively duplicate his work due to unknown averaging, scripting variables, and exact ferrite type.

To ensure a fair comparison, we  measured a randomly selected ODAC production unit to establish baseline requirements. Measurements were repeated with two additional, randomly selected units to confirm consistency. The exact same cable and test scripts were then repeated with ODAC revB. All tests are performed under a standard 100k load.

In particular, please note that many of our measurements are taken at different signal strengths and sampling rates than used by NwAvGuy. Our table results are also taken without averaging; instead, we observe worst case performance over the course of 5 seconds of data collection.

So do not be surprised that our baseline ODAC measurements reflect lower performance than NwAvGuy’s nicely averaged 2012 results!

Shown below are THD+N -1dBFS,  8x averaged sweeps of each channel, directly comparing ODAC to ODAC RevB . The original ODAC’s right channel closely resembles NwAvGuy’s 2012 THD+N sweep, with a peak of 0.005% at 9kHz, and 0.004% at 10kHz. Note that the Left channel of the original ODAC differs from its Right channel in our sweeps. This observation is consistent across each unit tested from 2013 and 2014 production batches, despite no channel differences visible in 2012 benchmarks. RevB’s THD+N is consistent between Left and Right channels.

Revision B also cuts THD+N in half at 10kHz, and remains below 0.0030% across the entire audible spectrum for each channel. Both versions are well below NwAvGuy’s suggested transparency limits (green line).

RevB’s full-scale performance is remarkably similar to the original ODAC. Notice that both DACs produce THD > 0.005% at 0dBFS due to FFT summing phenomenon at full-scale:

Elevated THD at 0dBFS is consistent for all DACs we’ve measured, and is the reason engineers (including NwAvGuy) typically conduct DAC benchmarks at -1dBFS or -3dBFS. Simply put, digital to analog conversion is less ideal at 0dBFS. Any reasonable recording should be free of such peaks. At any rate, it’s ideal to slightly reduce DAC volume when listening to recordings containing frequent 0dB peaks.

Noise: The newer PCM5102A DAC automatically enters a soft mute condition in the absence of an audio signal, pushing the measurable noise floor to an impressive -115dBu (near the dScope’s measurable limit). Therefore, noise was also measured with an applied -180dBFS, 20kHz signal, revealing the active state noise floor. RevB manages -103 dBu, slightly superior to the original ODAC’s -102 dBu. All noise components of RevB are well below the transparency requirement of -110dB for both mute conditions.

Crosstalk: The PCM5102A’s soft mute function causes a standard crosstalk measurement to produce abnormally impressive results, as one channel is digitally muted. Thus, crosstalk looks substantially superior at all frequencies for RevB.  Crosstalk measurements are similar between ODAC and ODAC RevB with a sufficiently small signal applied to the “muted” channel. Also note that the 20kHz “Ch A” test point is invalid for all four curves, as the dScope script conducts the test too quickly during relay initialization. “Ch B” curves at 20kHz are accurate.

Reliability fixes only necessitated a new power supply LDO and DAC IC. We swapped the USB controller for two reasons. First, the SA9023 provides 16/88.2kHz support. Second, its jitter performance is noticeably superior to the older TE7022L. We actually tested a TE7022L+PCM5102A prototype in effort to stay closer to the original ODAC. The SA9023 was ultimately a finer choice. Keep in mind that even the TE7022L produced audibly insignificant jitter (components below -110 dB). Hopefully 16/88.2kHz functionality adds value to some.

ODAC produces audibly negligible sidebands (below -120dB) within a few thousand Hz of 7kHz, whereas RevB’s distortion shows less jitter but higher amplitude components around the same tone. Note that all of these components are more than an order of magnitude below the audible transparency limit of -90dBFS (green line).

Sidebands are slightly more pronounced from RevB. While sidebands are higher, NwAvGuy prescribed a maximum sideband limit of -90dBr with 2VRMS reference for frequencies below 19kHz, and -80dBr above 20kHz to achieve transparency. RevB meets expectations.

The dScope is internally limited to -6.03dBFS for the Twin-tone script. Yoyodyne points out that NwAvGuy displayed a sum of powers and utilized custom scripts when conducting IMD measurements (-6dB + -6dB = -3dB).

Linearity: Both versions demonstrate excellent linearity from -1dBFS, down to their respective noise floors.

ODAC RevB begins shipping in all JDS Labs ODAC products ordered after 9:00AM  CST on Monday, May 11 with unchanged pricing:

Please note that product titles are unchanged, as performance is audibly the same for both versions of ODAC.

For orders placed outside of jdslabs.com, please contact your reseller for availability information. It will take some time for ODAC RevB to make its way to all end retailers.